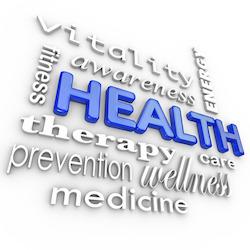 Among the miracles of modern medicine is the fact that, according to research by the National Institute on Aging, 76% of adults over 65 label their health as “good” or “excellent.” Maintaining good health into old age is becoming more and more common. However, there are some medical issues our honored elders continue to struggle with.

Oral Health
The CDC tells us about a quarter of all Americans over age 65 have no natural teeth, and a similar percentage suffer from xerostomia (medically important levels of dry mouth). Xerostomia prevents your mouth’s natural defenses from kicking in, making it easier to get cavities, gingivitis, and even oral cancer.

Depression
16% of women and 11% of men over age 65 suffer from at least one symptom indicative of clinical depression, with diagnosed depression becoming more common with age. Social interaction seems to be the #1 way of addressing this issue.

Obesity
Among adults ages 65-74, around 40% qualify as obese, with the amount dropping as age advances. As a strong predictor of several other items on this list, heart disease, diabetes, and cancer among them, the label of ‘health concern’ is highly appropriate here.

Substance Abuse
A study from the National Epidemiologic Survey of Alcohol and Related Conditions claims that 20% of people over 65 have or are recovering from a substance abuse problem. Because alcohol and other controlled substances interact poorly with many prescription medications, this is a greater concern than many believe.

Falling Down
This might seem like a bit different from the others, but a whopping 13.5% of all ER visits by senior citizens are due to unintentional falls. Most of these falls occur at home, and most are due to unsafe conditions.

Influenza and Pneumonia
These two infections are the seventh most common cause of death for people over 65. Needless to say, these illnesses are not nearly the low-stress, annual-or-greater event they come across as in youth and middle age. Keeping up on the pneumonia vaccine and annual flu shots is highly recommended for those 65 and older.

Diabetes
About a quarter of men and a fifth of women over 65 live with diabetes. The key to preventing dire consequences from diabetes is recognizing the symptoms and catching it early, before it can do exact permanent organ and muscle damage.

Osteoporosis and Low Bone Mass
Changes to bone density and mass can do more than make falls more dangerous, they can also reduce mobility and energy levels as well as adversely affecting the immune system. The National Osteoporosis Foundation places the number of Americans affected at around 52 million, the vast majority of them over 65.

Alzheimer’s Disease
It is difficult to know precisely when someone should be diagnosed with Alzheimer’s (as opposed to another form of dementia), but the American Alzheimer’s Association believes 5 million or more Americans over 65 is a solid number.

Respiratory Disease
The 3rd most common cause of death in people over 65, chronic lower respiratory disease infects one in five men and one in four women. In addition, having such a disease weakens your immune system and makes you more vulnerable to further infections and other diseases.

Cancer
Cancer is the 2nd most common cause of death in people over 65, affecting 28% of men and 21% of women. Caught early enough, most kinds of cancer are treatable. Regular mammograms, colonoscopies, and skin checks are a vital part of life over 65.

Arthritis
According to the National Institute on Aging, while it is never lethal on its own, arthritis affects roughly 51% of the senior population and is the #1 condition that seniors combat. By discouraging activity, inflicting constant pain, and lowering quality of life (along with being uniquely pervasive), arthritis is a leading contributor to many of the other conditions on this list.

If you begin suffering symptoms, work closely with your medical team to develop an exercise, nutrition, and potential pharmaceutical plan to address the problem comprehensively. With the right measures in place, chances are much better you can avoid the negative consequences arthritis inflicts on so many seniors.