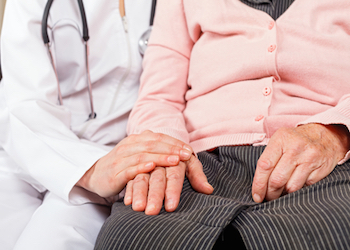 Not all of our honored elders end up spending an extended time in the hospital, but when one of them does, there are certain things that we should all be aware of and watch out for. The problems with becoming suddenly and massively sedentary are significant, but more importantly, they come in a ‘snowball’ of ever-increasing severity.

One Week
After just a week of bed rest, the collagen that surrounds muscles and tendons begins to tighten, reducing flexibility and causing contractures; a condition wherein a muscle cannot extend to its normal full length, causing significant reduction in mobility. In seniors, the most common contractures occur in the ankle and shoulder, making it difficult to walk or reach for high/distant objects.

Muscle atrophy sets in almost immediately, with major muscles losing 1-3% of their strength per day of bed rest, or about 15% of their strength on average per week. Oxidative capacity; that is, the muscle’s ability to use oxygen to burn ATP (the molecule our muscles use for energy under most circumstances), diminishes by a similar amount, so both strength and endurance are lost.

Whole-body insulin sensitivity plummets by a massive 30% by the end of the week, causing a significant increase in insulin production and not much else…yet.

Two Weeks
Muscle deterioration continues at about the same pace, but by now the bones are also deteriorating due to the aforementioned mineral excretion. The kidneys are also working overtime, because the minerals the body would usually be turning into bone are instead being filtered out and excreted.

The big change is that while the insulin-sensitivity problems that showed up after one week of bedrest are relatively easy to overcome with a deliberate regimen of exercise, after two weeks, they have “set,” and it is surprisingly common for our venerable loved ones to become permanently Type II diabetic after extended bed rest. The is because it is very challenging for them to get enough exercise to restore their prior levels of insulin sensitivity.

One Month
Should your honored elder end up in bed for a full month, they will undergo cardiac deconditioning, where their heart basically says “nope” and begins to pump less and less until it reaches about 70% of its normal pump volume. At this point, the heart has to pump faster to make up the difference, which leads to increased stress on the heart muscle itself.

Around the same time, it is common for one or more lobes of one or both lungs to stop inflating fully; not a collapsed lung exactly, but something similar. The end result is low blood oxygen, which can in turn lead to headaches, dizziness, confusion, clumsiness, and fainting.

Two Months
By now, the dysfunctional-lung situation is a given, and it has lasted long enough to be regularly causing sleep apnea, which in turn causes disrupted sleep patterns, resulting in exhaustion, memory loss, profound confusion (which is very easy to mistake for the onset of dementia), and intense irritability.

After two months, the psychological effects of prolonged bed-rest are even worse than the physical effects. This is particularly true among the elderly, who are trained by societal expectations to see their future as “sealed”.

After two months of physical deterioration, a trifecta of depression, anxiety, and isolation sets in, and they begin to believe that they are incapable of recovery. Combined with the irritability, confusion, and memory loss caused by the physical lack of sleep, this makes dealing with an elderly patient that has endured two solid months of bed rest extremely challenging.

How to Fight the Effects of Bed Rest
In healthier, more mobile seniors, studies have shown that short (2-minute) bursts of relatively high-intensity jumping up and down (always with a physical therapist on hand, usually literally holding their hand) is an excellent way to rapidly regain almost all of the losses from bed rest, such that a sufficient diet and hydration can take care of almost all of the rest.

For less-mobile or more-fragile seniors, the best answer science has found thus far has been resistance training. One study of exclusively 87+-year-olds found that doing a few repetitions, each of 80% of their maximum ability, of a standard routine of resistance training exercises was quite effective at rebuilding muscle mass and tone, and that the bone density required to sustain that growth came naturally, provided the senior eats an adequate diet.

For the completely immobile, the best we have been able to come up with is directly stimulating muscle activity using electrical shocks, much like those As Seen on TV™ ab-zapping belts. This is not a terribly comfortable alternative, however. Studies have shown that using electrical stimulation to mimic actual muscle activity has prevented muscle atrophy and maintained muscle fiber synthesis in bedridden patients.

If your honored elder ends up requiring prolonged bed rest, please be aware of the extraordinary not normalcy that sitting still for days or weeks on end can cause. And talk to their caregivers (both at the facility and at home) about what those effects are and how to fight them.