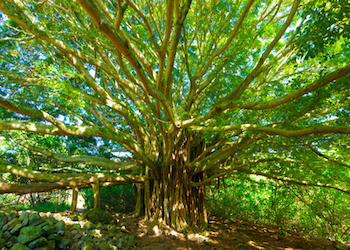 I once asked a client if she had any burial wishes as we were preparing her will. “Yes,” she replied. “I would like to be composted.” Her response floored me. What was she talking about? She clearly meant something more than just being cremated, but I couldn’t imagine what she was talking about. “I’d like a green burial,” she continued. “One that doesn’t pollute the earth. I want people to remember I was here, but I don’t want to have a negative impact on the earth. I want my death to be meaningful, too.”

I’d never heard of green burials, so I did what anyone would do in my situation: I Googled it. My research led me to a whole body of literature (pardon the pun) and websites – while traditional Jewish and Moslem burials were ecologically friendly, the modern green burial movement began in the United States in the mid 1990’s.
What is a green burial? It is a natural way of caring for the dead that leaves a minimal impact on the earth. There can be many approaches.

Start at the funeral home – One approach is to use only bio-degradable shrouds (like silk, wool or cotton), caskets (like pine or bamboo) and urns, so that nutrients can go back into the earth. If embalming is involved, is to do so using herbs instead of formaldehyde. Even if a body will be cremated, formaldehyde has been found to be toxic.

Then there is the decision whether to bury or to cremate the body. There are certain cemeteries solely devoted to green burials. In these sites, only biodegradable products are allowed, and there are no cement grave markers. Rocks, shrubs or trees may be used instead, so the cemeteries look more like a nature preserve. Other cemeteries might be hybrid, offering both natural and traditional burials in different parts of the area.

You don’t even have to use a cemetery – you could have a burial at sea (and you thought that was only in the movies)!

If you are going to have your body cremated and your ashes scattered, make sure you are complying with local laws. New England Burials At Sea  offers full burial services offers services that are in compliance with local and federal law.

Another option that intrigued me was called Eternal Reefs. The company takes a person’s cremated ashes and incorporates them into an environmentally safe cement mixture, which is then lowered into the sea and made into an artificial reef, thus restoring natural habitat in the ocean.

How do you find a funeral home that does green burials? Do a Google search to find one in your area, or look on the directory maintained by the National Green Burial Council.

There are many more resources available now than when I first researched ecological burials several years ago. People are being very creative in coming up with new ideas for minimizing our footprint after death. I, for one, find this exciting, for to me, it seems to complete a circle. A meaningful life can create a meaningful death. And vice versa.

Joy S. Rosenthal, Esq. is an experienced, caring New York City-based Family and Divorce Professional Mediator and Attorney. Joy founded Rosenthal Law & Mediation in 2006 to use both law and mediation as a tool to help families as they move through transitions. Her services include Divorce Mediation and Elder (adult sibling) Mediation, Adoptions, Collaborative Divorce, and representation in custody and visitation disputes. She also offers wills and estate planning. Visit Joy at www.joyrosenthal.com.