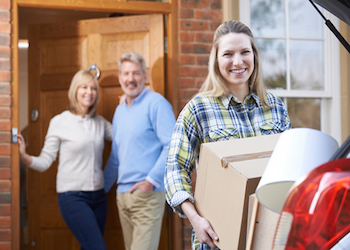 Is your first child going off to college this Fall? It certainly brings up a host of differing emotions. How quickly she grew up -it seems just like yesterday that you were teaching her to tie her own shoes, ride a bike, cut her own food, etc. etc. etc. And now off to college? Where did the time go? Does this sound familiar?

Like many, I have personally faced these emotions during three different generations, my own departure from home for college when I was 17, my first child’s departure when he became a Freshman and now my grandchildren. I cannot tell you whether it has become harder or easier to accept this separation from family, but the varied emotions are still there.

What has always changed for sure are the times in life when I experienced those emotions. When I was a student, I was fearful of not being able to do well and graduate. As a parent, it was the fear of not being able to pay the tuition each year due to the vagaries of the business world , and now, as a grandparent, I wonder if I will even live long enough to see their graduation and the years that will hopefully follow.  For the student there is the anxiety that comes with facing the new challenges of this next stage of life and the fact that they may now owe money for student loans.

Many parents believe that their kids should have some skin in the game and required their children to take out student loans.  The student now wonders what it will feel like some day when they need to be repaid. So here’s a suggested concept to help relieve some of that departure anxiety.

A possible gesture by the parents might be to establish an understanding that if the child does well, a certain portion, even all, of those loans will be repaid by the parents. If the child does poorly and barely squeaks by or doesn’t even make it, those loans remain theirs. Studies have found that students that do have some skin in the game tend to do better in college. Our wishes for them to study hard and do well will now have some real meaning behind them.

As a senior citizen and grandparent, I can only hope that my grandchildren made the right college choices. When I was a student and a parent I had some say in making those choices, but as a grandparent, I could only wait on the sidelines and see if I would be asked for guidance.

The old adage says that when the kids are gone, the mortgage is paid off and the dog dies, life becomes sweeter. It certainly becomes quieter, but perhaps not happier. Maybe we should rethink this dog idea.

Melvin Chilewich, JD, is a Registered Investment Advisor and Financial Services Professional who specializes in showing people a better way to save and accumulate money so that they can reach financial independence as quickly as possible. He also concentrates much of his time advising families and other professionals on how to maximize college financial aid and reduce out of pocket expenses. He believes that the cost of college today is quite daunting for parents and he teaches them how the financial side of the college admissions process works. He has saved families thousands of dollars on the cost of college. His philosophy: Save money on college, have more for retirement.