Home / Aging Family Members / Caregiving; How To Lose Everything By “Saving Money” -Part 1 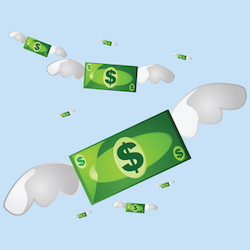 Tom and Helen Conway loved their home, their family and their life. Raising three wonderful children in their home and having Helen’s widowed father living nearby, they were the storybook American family. Tom’s thriving downtown art gallery and Helen’s successful online advertising agency provided a very comfortable income for the family and their life was wonderful.

Greta did all the housekeeping and most of the cooking and acted as a nanny to the children. In return, Tom and Helen provided her with her own room and bathroom and all her meals, and they also gave Greta $300 in cash every week. Greta was very grateful and she often told the Conways, “Thank you so much for allowing me to help you and your family and for being so kind to me.”

Tom often said, “We don’t know what we would do without Greta” and Helen would add, “I can’t imagine living without her here.”

Over time, Greta became like a member of the family. She was not only the family’s housekeeper; she also helped raise the children like a nanny and be a caregiver to them. Then she stayed on to help keep the house in order as the kids went off to college, one by one, and they raised her pay to $400 per week.

By this point, Greta had been working for them on a full-time, live-in basis for two years, and they also told her she could take off on vacation one week each year with pay. Every Friday, consistently and dependably, they paid her in cash.

When Helen’s aging father, George, began to need too much help to be safe and continue living alone in his own home, Tom and Helen invited him to move in with them so that they could help him avoid having to move to a nursing home. “It’s the right thing for family to do”, said Helen, “And besides, we have Greta to help out.”

As such things often turn out, Greta eventually became George’s primary caregiver. She helped him with his personal care needs as well as other helping him in other ways, such as driving him places, helping him get in and out of his wheelchair, and even just reading to him when he asked her to.

By this point, Greta had been working on a full-time live-in basis for the Conways for six years. They were very grateful for her help and raised her pay to $500 per week and told her that she could begin taking two weeks off each year with pay, as vacation time.

One day two years later, Greta asked Tom and Helen if she could talk with them about “something important”. After asking a neighbor to come over to sit with George in the family room, they sat down with Greta at the dining room table, a little apprehensively, and asked her what she wanted to talk about.

Greta told them, “Two weeks ago when I was watching TV in my room one evening, I saw an ad for a website called FairPayForCaregivers.org. The ad said that the website offered information and tips for caregivers. At the bottom of the home page, it said that it was published by a law firm.”

Hearing this, Tom and Helen began to be concerned. Helen asked Greta, “That’s interesting. What did you do?”

END_OF_DOCUMENT_TOKEN_TO_BE_REPLACED

2 thoughts on “Caregiving; How To Lose Everything By “Saving Money” -Part 1”