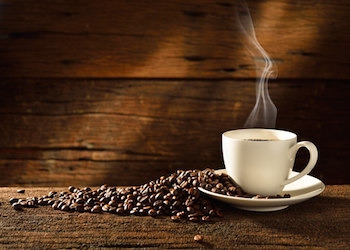 Anyone a coffee addict out there? That used to be me. 1 latte a day to get me going. Eventually it increased to 2 cups a day, sometimes 3, because I thought I was simply building up tolerance. What I was doing though was worsening my adrenal gland (stress gland) response.

Caffeine can help with energy, focus and gives you a burst of energy in the morning by boosting cortisol, our primary stress hormone. Cortisol does a number of things for us like lowering inflammation, repairing damaged tissues, raising blood glucose levels, and of course increasing energy. These effects are great and works short term – like when you sprain an ankle, or worse yet, sprain and ankle while being chased by a bear! Think of that fight-or-flight adrenalin response. But cortisol is not so great when levels are elevated all the time like in chronic stress.

When you consume caffeine daily, you create an artificial stress response. The body thinks it’s being chased by a bear, but in reality you’re sitting at your desk trying to meet a deadline or dealing with an angry client while downing your coffee for energy and focus. Over time, the adrenals simply can’t keep up with this frequent stimulation. Coffee eventually stops working for energy and here’s the proof:

A 2005 study demonstrated how daily coffee (caffeine, really) influences cortisol secretion. In the study, 96 participants were divided into two groups. One group had a daily intake of 300mg of caffeine for 5 days. Another group had a daily intake of zero caffeine for 5 days. Cortisol levels were continuously monitored. On day 6, each group received 250mg of caffeine (like a cup of drip coffee) on top of their regular dose. The group who had the daily caffeine, had zero cortisol boost in the morning, whereas the group who didn’t have daily caffeine got a nice, robust morning cortisol response on day 6, which is what most people desire with their morning cup of Joe.

Are you drinking too much caffeine? According to Starbucks, here’s the caffeine comparison of some common 12oz (Tall) drinks:

If you bump up that latte or drip coffee to a grande or a venti, or drink 2 or 3 cups of that on a daily basis, you’ll really diminish that morning adrenal response. So for my coffee lovers out there (me included), it’s important to not continually push your adrenals into overdrive. Give them a break. Try green tea instead. Try decaf. Try to cut your consumption by half, if not more.

To give you better energy, try to incorporate 10 minutes of meditation or exercise, both of which can help energy and focus. You’ll notice over time that a periodic cup of morning espresso will again give you a nice boost in the morning you might have been missing.

Michael began practicing naturopathic medicine in 2003 after receiving his medical training at Bastyr University, an internationally recognized leader in natural medicine. Naturopathic medicine is a distinct profession of primary health care, emphasizing promotion of optimal health through the use of nutrients, herbs, physical medicine, and homeopathy. Michael recognized the need to integrate naturopathic medicine with conventional medicine so obtained a Physician Assistant certification from the University of Washington. There is an increasing demand for integrated healthcare, and as a naturopathic physician and a physician assistant, Michael can merge both types of medicine to provide a well-rounded plan of care to my patients. Michael chose medicine as a career because he truly enjoy interacting with people and sharing life experiences. A visit to your health care provider should not only be about treating disease, but also about promoting a healthy lifestyle. Michael trys to foster a mutually respectful relationship with each patient to promote a team approach to medicine.