Home / Divorce / The Devil in the Parenting Plan 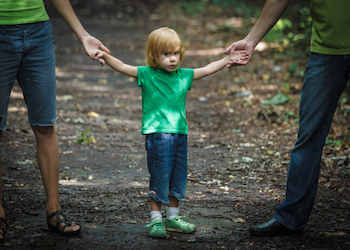 Parents often try very hard in mediation to negotiate a fair parenting plan that acknowledges their children need both parents in their lives.

But sometimes things go wrong in the execution. The devil in this case is in the details of carrying out a plan.

We were mediating with a couple that had two young children They were adamant about being good co-parents and never putting their kids, a seven year old son, and a five year old girl in the middle of their very acrimonious divorce.

Still the five-year-old was having nightmares about bad monsters hurting mommy and daddy. And the seven-year-old went from being an A student to barely getting Bs.

The parents brushed this all off to the normal upset of divorce. But in mediation, they realized they were contributing to their children’s stress unwittingly.

Children are very sensitive to how parents are communicating post-divorce and how each parent is perceived by the other. Even the best parenting plan will fail if:

When the children are exchanged, going from one parent to another is made stressful. Watch how you speak to your ex. Even if you’re furious and having a hard time being civil, modulate your voice – exchange pleasantries. A few civil words exchanged between mom and dad during the pick up or drop off of a visit goes a long way to reassure children they don’t have to take sides.

Parents avoid all situations where they might see their ex – even during their children’s events. If you always alternate watching your child play soccer or performing at a recital, you’re depriving your children of knowing both parents are watching them.

Parents let relatives or friends talk smack about the other parent. You’ve never said a bad word about your ex. But your mother comes over and starts ranting about what a loser your ex was. And she’s doing so in front of the children. No matter how satisfying it is to let her talk. Don’t if the children are in earshot.

The plan doesn’t take into account that it may need tweaking because of your children’s response. Kids are telegraphing all the time their responses to your parenting plan even if they’re not saying anything. You don’t have to acknowledge every reaction your child has – you can keep getting Johnny up at 9 AM instead of his preferred noon to see his father. But there are subtle signals that should be considered. The son and daughter of our couple were reacting to a total disruption of time schedules – eating and doing homework much later than usual when with their father. Simply reverting to their usual schedule helped these children adjust.

Every parent wants to make sure their co-parenting schedule works. Be respectful to each other in front of your children, make sure others are too, remember that two parents are better than one in certain situations and pick up on subtle clues your children might not be articulating.