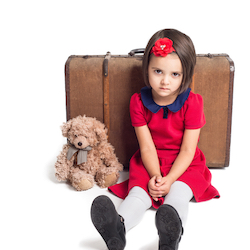 The wife of the couple we were mediating with sat weeping in a session. She and her husband had amicably worked out the difficult terms of their divorce.  Their finances were split evenly. The couple lived just two blocks apart, and their children were young teenagers. Both the husband and wife felt comfortable with their children going back and forth between the two parental homes with a loose custody schedule.

“To think of never celebrating Christmas again as a family is terrible,” she said. “And it’s harder still to think that every other year I won’t spend Christmas Day with my own children.” The husband was starting to tear up hearing the wife’s words.

We proposed an alternative plan that seemed to fit more with this couple’s needs. Since they got along relatively well, it was possible for them to celebrate Christmas together. They liked the idea immediately. They realized this arrangement might not always work for them –  since family ties and potential significant others might affect this plan. But for now, they realized a family Christmas might be the perfect way to help themselves and their children heal post-divorce.

When a divorce is litigated, spouses are instructed to talk to each other only through their attorneys. This prevents couples from realizing there are certain activities – especially celebrating holidays – that they might negotiate to do together successfully – not just for the sake of the children, but also themselves.
We’ve had couples suggest other creative ways of carving out family time during the holidays even after divorce:

Sometimes there  is so much animosity between two parties divorcing that it is hard for them to conceive of having any holiday family time. However, we have found in our mediation practice that couples who put their children first will find creative ways of coming together even for a few hours during the holiday season – to the benefit not just of their children but themselves.