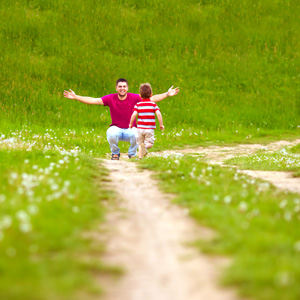 by Robert Naseef~ For the past 25 years I have been a big advocate for autism awareness.  When my son was born in November 1979, I jumped for joy.  When he was diagnosed with autism 4 years later, I thought my head was going to explode.  I couldn’t get the word autism out of my mouth for months. I have been living and learning about autism ever since.

For the past 25 years, I have been writing and teaching and counseling families of children with autism and other special needs. For the past year I have been moderating an online discussion group of fathers and self-advocates called “Guy Talk” at www.autismbrainstorm.org on the second Sunday of every month.

Times are changing but most men have been raised to hold in their emotions or risk being seen as weak. If we can’t fix something, we don’t want to talk about it—a huge factor in male depression and relationships.  As Nelson Mandela wrote, “A boy may cry; a man conceals his pain.”   Boys are still taught to feel ashamed of their tender feelings, especially their gentleness, caring, vulnerability, and fear.  Thinking you must be “strong” is a horrible burden to bear. On the outside men may be grumpy and irritable, but on the inside hurting while asking for help is unthinkable.  As fathers we are faced with the responsibility to do all we can to overcome the challenges while accepting what is not changeable, embracing our child on the spectrum, and opening to the possibilities for profound learning and happiness.

Yet life doesn’t stand still and wait for us.  Families need fathers to express themselves, and to spend time teaching, playing, and otherwise engaged. Children with autism hunger for their fathers’ involvement and approval just like every other child. Our monthly “Guy Talk” conversations are filled with open and honest sharing of the challenges, lessons, and joys that come with the autism spectrum and recorded on YouTube.

For example, Dr. Stephen Shore, non-verbal until 4 and a regular contributor to “Guy Talk”, has fond remembrances of his father.  Today he is professor of special education at Adelphi University, teaches music to children with autism, and travels the world building autism awareness and acceptance.  He praises both parents for believing in him.  He credits his mother for being his early intervention program before there was such a thing in the 1960’s. Stephen did wish that his father had gotten more involved with his special interests in his youth.

Comedian Mike Guido has a one man show which tells the story of his journey with his daughter, Maria who has severe autism.  Mike described Maria’s innocence and vulnerability as a blessing which transformed him from a man full of fear, frustration, denial, and sadness to a man who is happy to have Maria in his life.  Since Maria is immune to the gossip, jealousy, and meanness that can make us unhappy and stressed, she is always happy. Since people like to be around happy people, her demeanor makes Mike and others appreciate Maria just as she is.

When facing a problem, men want to have a plan to take action. For Mark Walker, it took time to accept his daughter, Kennedy, who has a rare genetic disorder, Cornelia de Lange, which has many of the symptoms of autism. As a father, he felt left out in the medical world as professionals tended to focus on Kennedy’s mother. Mark came up with a plan and started “Dance with my Daddy,” a yearly event where a growing number of fathers of children with special needs dance and celebrate with their children.

Dr. Kaveh Adel, a dentist by profession, has two sons with autism. Now that he understands his sons’ conditions, he is able to accept them and empower them in a continuing process to pursue what they want. Watching his son dance and sing, he sees him as a wonderful human being. Kaveh has conveyed his thoughts about awareness and acceptance at the individual level as a cartoonist on his recent blog, “Lit up Blue.”

Social worker Brian King wears many hats as a cancer survivor, a self-advocate with ASD, dyslexia, and ADHD, and as a father raising 3 sons on the spectrum. He speaks openly about what it means for him to have autism and how telling your story creates more awareness and acceptance on the individual level. He helps others understand how acceptance changes from day to day and how loving someone helps get past the questions that often haunt people, such as why me? That love results in “Joy just as they are.” On his G+ page,  Brian gives freely of his expertise and time as a professional coach for navigating neurological differences.

Mark G., who has a daughter with cerebral palsy, is a regular contributor from the Washington State Fathers Network. Mark has shared how his wife locked him out of the house and twisted his arm to attend his first meeting. Besides sharing his own journey as a stay-at-home dad, Mark shares the collective wisdom of the Washington State Fathers Network. For example, many children living with differences and limitations may not reach typical milestones on time—or at all. Members of the Fathers Network regularly celebrate their children’s progress calling these steps “inch stones.”

Peter F. is a software engineer in the Philadelphia area who is raising twins, a boy and a girl, diagnosed on the autism spectrum. Pete himself was diagnosed with Asperger’s within a year after his children’s diagnosis. Pete shares how he tends to interrupt a lot, just like his children, and how that makes his wife’s job that much harder. As he learns to understand his own diagnosis, learning to listen and wait until people finish are communication tools that help him to be present and connect with his wife and children as well as at work. Just like neurotypical fathers, as he learns to understand himself, he is becoming a better father.

Speaking for myself, I tried so hard to change my son, Tariq. In the end, it was he who changed me; he made me a better father and the man I needed to be. For a long time, I thought I would never laugh or smile again unless he recovered his speech which vanished at 18 months. He never spoke again, but I enjoy life and love him how he is, and  this is how his autism has spoken to me.

Focusing too much on trying to change someone with autism can block happiness for everyone involved. This does not mean denying real problems. It just means paying attention and cultivating the moments we might overlook, such as our children running to us when we get home, our partner glad to see us after a long day, or our children enjoying their favorite activities.

Awareness of 1 in 68 children having autism isn’t enough. When fathers open up and express vulnerable feelings, everyone benefits through acceptance of our situation in the process of becoming our best selves as men in a family. Loving our children as they are while working on their challenges brings happiness spontaneously in the moment. That love brings us closer.

Robert Naseef, Ph.D., speaks and writes in a singular voice as a psychologist and father of an adult son with autism. His latest book, Autism in the Family: Caring and Coping Together (2013) by Brookes Publishing includes advance praise from autism experts, parents, and people with autism such as Temple Grandin and Stephen Shore. Learn more about Robert at www.alternativechoices.com