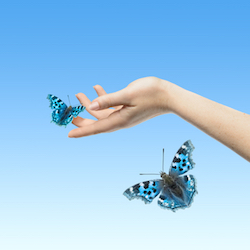 While reading Dr. David Hawkins book Healing and Recovery  I became fascinated with his premise that the experience of guilt is the root cause of disease. His definition of guilt is not the kind of guilt one experiences from stealing, lying, cheating etc. Actually, this is the experience of our highest self letting us know we are operating out of alignment with our Truth of who we really are and instead, acting from the ego and fear.

The Guilt Dr. Hawkins refers to is inappropriate guilt; The feeling  we encounter when we are standing in our Truth. Self perceived selfishness creates the experience of shame and fear.

For example, a man named David is ready to step into his father’s position of the family business. All his life he has been groomed for this step. The business was started by his great grandfather and it is expected the first born child of each generation runs the business and passes down its legacy to the next.

Let’s say the man however has no desire to live in the paradigm of the corporate world. His true love is music. The idea of his music brings him a sense of joy and vitality. When playing music he feels the highest self experience. It aligns with his truth. The thought of running the family business causes a sense of heaviness in his chest. He feels no joy, no inspiration, only obligation.

He is authentic with father. It creates a huge family crisis. His mother tells him his father’s heart is broken. He has let everyone down. He is selfish and ungrateful.  With fear and uncertainty he is doing the right thing, David decides to stand in his Truth and refuses to take over the business. Yet it is a struggle because he feels compelled to justify standing in his Truth. Not just to family, but more importantly, to himself.

He continues to be subject to the beliefs his family projects; He is responsible for his father’s depression. He is selfish and his happiness is not as important as being a loyal and doing what is right for the family.

His creativity suffers. He feels guilt for the joy his music brings him. His fear of what others think keeps him in a constant state of low grade fight or flight.  As a result, chronic elevated cortisol levels (along with its partner epinephrine) wear down his body. He lives with the belief he is the cause of his family’s sadness and grief.
It is well documented in the medical literature that long term elevated cortisol levels lead to inflammation in the body. In recent years inflammation has been identified as the one of the major contributors to multiple diseases as well as the majority of auto-immune diseases.

David internalizes the beliefs of his family that:
• He is responsible for other’s state of being
• Being happy makes him selfish
• What others think of me is more important than my Truth

Overtime, the guilt process wreaks havoc on his body. Chronic inflammation leads to the development of rheumatoid arthritis and heart disease.

By not owning his truth not only had David hurt himself, he has not allowed his father the opportunity  to work through his own process of growth by surrendering control and identifying  his own fears and their root beliefs.

Our process as spiritual beings in our human bodies is to transcend our fears, our self limiting beliefs and grow into our highest selves. When we allow inappropriate guilt to rule over us, our body will manifest our beliefs.
Own your Truth. You deserve it.

“Guilt is really self- condemnation and self-invalidation of our worth and value as a human being.” ~ David R. Hawkins