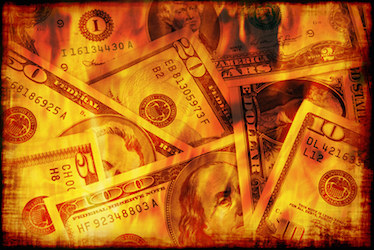 Tom and Helen Conway were the storybook American family, until their live-in housekeeper Greta met a labor lawyer online, who said that the Conways had been paying Greta far less than they should have, for the past eight years. Now, Greta told them, she wanted them to meet her at her lawyer’s office the next morning to talk about “making things right”.

The meeting with Greta’s attorney was already scheduled, she told them, for 10:00 the next morning, at the attorney’s office. Hoping to get this over with and put it behind them, they quickly agreed.

The next morning, Tom and Helen went to the law offices of Greta’s attorney. It turned out that the law firm was a large one, occupying several floors of one of the downtown highrise office buildings. They were ushered into a conference room on the 27th floor with a long meeting table surrounded by leather-upholstered high-backed swivel chairs. The walls were covered in dark wood paneling and there was a panoramic view of the city below through a window that took up the entire outside-facing wall of the conference room.

Greta came in, accompanied by a well-dressed, attractive man who introduced himself as John McDonald. After these polite introductions, the tone changed.

“Well, we’d better get down to business”, said McDonald. As you know, Greta has worked for you for virtually all of the last eight years, 24 hours a day, seven days a week, with the exception of a total of six weeks off for vacations. Here in California, employers are required to pay at least minimum wage and to pay overtime premium pay for any hours worked beyond eight hours per day or more than 40 hours per week.”

The Conways started to speak up, but McDonald held up his hand and said, “In addition to the daily overtime rules and rates, there are also weekly overtime rules and rates. In general, all hours worked in excess of 40 per week are subject to at least the 150% overtime pay rate, but in California we also have a special weekly rule that applies. That special rule requires that all hours worked, in excess of 8 hours, on the seventh consecutive day per week, must be paid at the 200% overtime rate.”

By now Tom and Helen’s heads were spinning, as they began to recognize the potential depth of the problem before them. To be continued…….