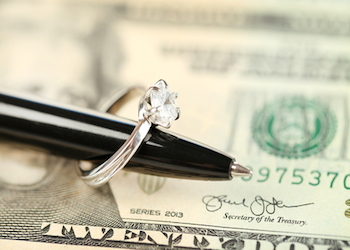 Valentine’s Day is upon us: Couples are thinking of love, marriage and yes – prenups. The old stereotype of prenups used to protect rich old men’s fortunes from their trophy wives is being replaced. Today more and more young couples who are in love and want to approach their marriage with a full heart and peace of mind are turning to prenups.

With mediation, couples don’t “lawyer up” and turn the prenup process into an adversarial one. Mediation allows couples to discuss their finances together in a cooperative atmosphere. And couples are recognizing there are many advantages to mediating a prenup, with little downside if done fairly.

A prenup requires you in mediation:

To reveal your finances: Both parties must fully disclose not only their assets, but also their debts. Often couples are self-conscious about telling each other their salaries or what they owe – but what marriage isn’t better off when there are no financial surprises?

To decide separate and marital property: No, the diamond ring you inherited from grandma won’t be considered marital property. But some inherited property is more of a gray area. Especially money that you comingle in a joint bank account. You can designate almost any property as separate in a prenup, even if acquired during the marriage, as long as you have clearly defined it. And as long as you both fully understand what rights you may be relinquishing and are in agreement.

To discuss budget expectations: One of you thinks $100 a month is reasonable for clothing. The other believes $1000 a month won’t suffice You really didn’t notice the difference until the mediation — not as unusual as you think!

Often the first frank conversation a couple has about money is when they’re in our office mediating – but it can be in very different circumstances. We have seen many couples divorce over money issues they never discussed when they were married. And, happily, we are seeing couples talking about money before marriage. What is the best prenup you can draft? One that’s fair, thorough, and then put into a drawer and forgotten – you go on to lead a happy married life.