Home / Health Crisis / Meditation, Mindfulness, and Maturity: The Benefits of Meditation for Seniors 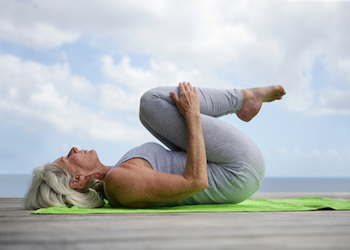 May is National Meditation Month, and in honor of that, I want to take a closer look at meditation in general, and what benefits it might have for our honored elders in particular. Meditation is often misunderstood and is fraught with overwrought Eastern stereotypes and modern fictional myths. The truth is that meditation is actually almost too simple for us to wrap our mind arounds.

There are several kinds of meditation, but all of them share a common element; they are all about consciously controlling your thoughts. That might sound odd given that many of the Eastern aphorisms about meditation make it seem like the point is to stop thinking or stop being genuinely conscious, but those aphorisms are largely misinterpreted.

The reality is that all meditation boils down to a few simple steps:

That is all! All of the description you might hear about altered states of consciousness or changes in your brain waves and so on is unnecessary. These might be occurring, but it is not something that you need to be concerned about.

The different kinds of meditation are divided based on what the object of your focus is supposed to be:

Thoughtful meditation is the most commonly practiced in India. The object of focus is a single thought, commonly called a ‘mantra,’ that you return your attention to. This practice is also fairly common in Orthodox Christianity, where the object of focus is a short phrase or passage with religious significance. The thought can be repeated silently but is often spoken out loud.

Visualization meditation is practiced all over the world by top-level athletes who generally have no idea that what they are doing is meditation. The object of focus is a single action, which is imagined in as clear a detail as possible. For example, every time a bowler visualizes their next bowl being a strike or a tennis champ visualizes serving an ace, they are using this form of meditation.

There are also much longer visualizations, however, most of which are oriented toward achieving calm relaxation. Unless you are quite practiced, it is most helpful to have a person talk you though these longer meditations, which is where the concept of ‘guided visualizations’ comes from.

Empty meditation is the most commonly practiced in Japan. Much like mindfulness meditation, it is more difficult because the object of focus is nothing. The purpose of empty meditation is to just keep letting go of thoughts as they come up, and keep your attention not focused.

Many believe that empty meditation is the goal of all other forms of meditation, and that the benefits of empty meditation are greater than the others. However, this is a subject that has not been scientifically examined with any thoroughness.

Meditating and the Elderly: What are the Actual Benefits?

So why should you be encouraging your honored elders to practice meditation? Let’s examine the benefits:

Anyone caretaking for an honored elder will recognize some of the issues mentioned on this list. Being happier, better organized, and less afraid (especially of impending dementia) is something that almost every senior citizen alive would be overjoyed to experience.

The best part about meditation is that it is so easy to practice. You do not even have to use the word ‘meditation’; just talk your aging loved one through the steps, get them to clear their minds for a few minutes a day, and build on that.