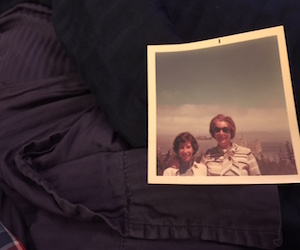 As a divorce mediator, I have often seen marriages fall apart after one spouse has been through a major illness – the emotional and financial toll of the illness has not united the couple – but driven them apart.

On a personal level, the blog I’ve written for Breast Cancer Awareness Month, is dedicated to my mother – who had breast cancer before it was fashionable. By fashionable I mean, before it was popular to talk openly about the disease and advocate for women diagnosed with it.

Before her diagnosis, my mother was proud of her womanly curves, her voluptuous breasts.

In 1969, after my mother received her diagnosis:

This is what she didn’t have:

This is what she had:

This is what I think she had:

This is what she remained:

My mother. Courageous. Indefatigable. Going about her day as if nothing had changed her. As if she weren’t waiting to hear whether breast cancer would kill her.

In this month, I want to honor the memory of my mother and all the other women who suffered with breast cancer alone, never experiencing the camaraderie, the comfort of knowing they were loved and respected as survivors.