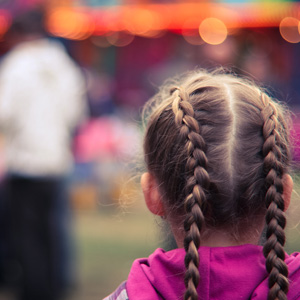 Just 2 Moms~The other day, someone asked me if my son knew that he had Autism, as they were struggling with deciding how to tell their own kids.  This is a common question we hear, time and time again.  People often tell us that they don’t know how to tell their kids about their Autism and that they just can’t bring themselves to do it.

The stress of telling your child that he/she has Autism, we would liken to the stress of “the talk”,

you know, the one about the birds and the bees?  No one wants to be a part of a stiff formal discussion.  This talk should be a natural progression.

It is better to seize opportunities as they arise and talk to a child at their level of understanding.  Deep down, if our kids are asking questions, “why do I go to a different school than my sister”—“why is this homework so hard for me?”—“why do a take a smaller bus to school?”—“why don’t I have more friends?”, then our kids with Autism are noticing that they are different than some of their peers.

To avoid the stress and emotions of bringing up “the ‘A’ word”, we suggest that you actually “wing it”.  In our world of schedules, planning and anticipating every scenario, this may seem like a foreign concept.  However, when an opportunity presents itself to talk to your child about their Autism, just listen to any questions they have.  Answer them and keep things on point – don’t feel this is the time to give them the Wikipedia definition of what is Autism.

As two moms, each with an Autistic son, we (Christy and Debbie) write from our own personal experiences.  Telling our sons about their Autism was interestingly similar.

One day after I told my twelve year old that I would be out late because I had a Just 2 Moms’ assembly program, he asked me what we talked about.  I told him that we spoke about Autism, and in fact, he had Autism.  I continued and told him, “it means that you just think differently than some other people.”  He asked me why he had Autism?  I told him, “some people are right-handed, some people have blue eyes, some people are good at art, some people need to wear glasses….it is just part of who you are.”  At that moment, the answer worked for both me and him.

Debbie:  One night, my husband and I were reading a book about Asperger’s Syndrome (a high-functioning form of Autism).  Our son, who was five years old at the time, (and already reading for two years), placed his finger on the cover title of the book and said, “What’s

AS-PER-GER’S?”  I looked at my husband, and he at me, and we took turns talking to him; “Great question!  It is something that you have that sometimes make you think differently than other children.  It is also is the reason why you are able to memorize all the colors in the Crayola 64-crayon box, and why you like to listen to The Three Tenors while you play Play-Doh.  These amazing things that you do are what make you unique!”  Afterwards, my husband and I breathed, knowing we gave our son what he needed to know at the moment which was just enough for him.

We feel it is important to stress the abilities, rather than the disabilities of Autism.  “I think you are incredible with memorizing all the presidents because of your Autism!  It enables you focus on facts and remember them!”  If you Google “famous people with Autism”, you will get quite a list of individuals who may have had Autism—Einstein, Edison, Henry Ford, Michelangelo, Thomas Jefferson, etc.—an impressive list of achievements accomplished by each of them!

We are reminded on the sage piece of advice someone gave each of us right around the time our sons were first diagnosed.   “The child you knew and loved before he was diagnosed with Autism, is the same child you know and love after the diagnosis; now you have a name for it and a path to investigate and follow.”  Wouldn’t it be better to have your child in the know and skipping down the path with you?

Christy Carlson and Debbie Schmidt, are not only great friends, but are both moms of Autistic boys. Together they founded the Autism awareness and acceptance non-profit, Just 2 Moms. They provide education and awareness about Autism and Asperger’s Syndrome (ASD). Their assembly program combines personal stories, a home-made DVD and interactives engaging the audience with a clear understanding of the strengths and challenges a person with Autism might have. Since 2007, the two have been presenting these programs in NJ, PA, DE and NY to schools, civic organizations, businesses, parent groups, churches and synagogues. Debbie is also the facilitator of the Camden/Burlington County Chapter of ASPEN (Asperger Autism Spectrum Education Network) www.aspennj.org www.just2moms.com

END_OF_DOCUMENT_TOKEN_TO_BE_REPLACED

4 thoughts on “Telling Your Child About Their Autism…”