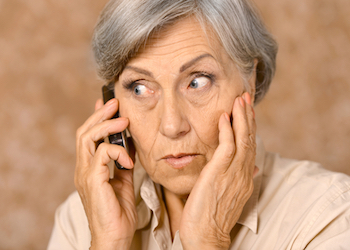 “What Is Dementia Anyway?”

After addressing a wonderful audience at a Community Based Presentation recently, a woman asked me: “What exactly is dementia?”

I started to expand on symptoms of dementia already included in my attendee handout. She politely listened and then added, “I mean, what does it look like? What do people with dementia do that’s different or alarming?”

For a nanosecond I was honestly a little surprised that, after talking about dementia/Alzheimer’s and highlights from my mother’s own journey in I Will Never Forget, she still had questions. And then it struck me that maybe the symptom words Confused, Agitated, Irrational, etc., were just that: Words without enough meaning or context.

“I get confused sometimes,” she expanded. “Can’t remember why I walked into a room; can’t find the magazine I just had in my hand. Do I have dementia or Alzheimer’s?” The bewildered look on her face guided my next move.

Instantly it occurred to me that I needed to rewind and clarify what behaviors someone with dementia would exhibit verses a periodic lack of attention that makes someone feel confused.

“Maybe these examples will help.” I offered.

Familiar Objects and Their Use:

We misplace things all the time, like a magazine, car keys, the TV remote. More than likely the stuff turns up eventually but sometimes in the most ridiculous of places. Decades ago, when cordless land line phones replaced the tethered version, mine “disappeared”. It wasn’t until the “refrigerator rang” that I realized where I had left it. I recalled cradling the phone between my ear and raised shoulder trying to free up both hands to put the groceries away. When the call ended, I set it down inside the fridge, finished loading the cold stuff and shut the door.

Snickering laughter filled the audience including the lovely woman with questions. When the phone was found ringing and cold, I shook my head in disbelief remembering how it got there.

“Someone with genuine dementia however,” I explained, “will not recall how the phone got into the refrigerator nor think it odd anyway. Someone with dementia might not even know what the phone is used for any longer.”

What qualifies as the Dementia Difference, is not knowing what the car keys are for, not that one can’t remember where they put them.

What qualifies as the Dementia Difference is the inability to execute familiar tasks or hobbies. Underwear over one’s pants; not remembering one has a pet; putting socks over the door knobs; repeatedly throwing away fresh food because it’s perceived as “poisoned”.

My lovely woman with questions was smiling and nodding so I continued.

We’ve all had the occasional situation of driving home after work or to a familiar store on “auto-pilot” – got to our destination safely but don’t exactly remember navigating it.

The Dementia Difference is literally getting lost going to a familiar place, whether driving or walking. People with dementia might find themselves down the street in their own neighborhood but not know where they are nor how to get back home. They might perceive a room in their own house as unfamiliar. The physical act of driving is very automatic and tragically that’s why people with dementia drive and get lost.

I retold these true events from I Will Never Forget. After my brother died, we had an impromptu memorial service in Sedona where my cousin Mike lived. My mother flew by herself from southwest Michigan to Arizona. I was barely in the door at Mike’s when he took me aside and whispered, “Aunt Betty (Mom) thinks she’s at Friendship Village. She asked this morning where her room was, number 342.” He went on to say that she had unpacked and repacked her bag, pulling it through his house looking for hers!

I chalked it up to numbing grief and shock after Mom had buried her son. But the Dementia Difference is that it doesn’t matter how significant one’s stress is nor from where it comes, one doesn’t forget that the environment they’re in looks nothing like their own home.

Perhaps one of the most grating of dementia behaviors families report, is being asked the same question over and over and over. It’s not that the individual doesn’t recall the answer, although that too, it’s that they don’t remember even asking the question in the first place. That short term memory loop is ravaged by Alzheimer’s as it advances rendering it mostly useless.

When I finished expanding on the details unique to the Dementia Difference, I turned back to my lovely lady and asked if anything I said had helped. She got a little misty eyed and acknowledged the stories were so much more beneficial than just the Words!

Indeed, they often are!