Home / Editorial Monthly Focus / The Many Faces of Hardship 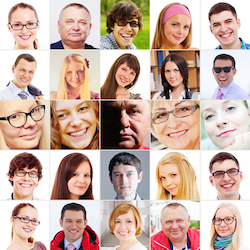 You can’t tell what someone is going through by looking at them!

The other day I was in line at the pharmacy. The gentleman at the register looked to be about 65; it’s often hard to tell.

The pharmacy counter is located almost in a cove of the store so there isn’t much to look at except the people in line ahead of you. I just stood there semi-mindlessly watching him and the woman behind him.

I couldn’t tell if they were together or not. She wasn’t standing next to him nor did they talk to each another, but she was very close behind him. Maybe she had been waiting for a while, I theorized, and by closing in on his personal space she was making a non-verbal statement to the cashier to “hurry up.”

Although the gentleman was tall and had some distinguishing features, the lady was of average height, build, maybe 55. She had no remarkable habits, like pacing or facial grimaces. Honestly I never would have noticed her had she not abruptly walked over to me and asked “Are you alone?”

I was about to form a vague but socially appropriate reply when the tall man quickly intervened.

“Just ignore her. She has Alzheimer’s” as he cradled her by the arm and gently but firmly pulled her back. His words were sharp but his tone was apologetic.

I waved him off with “It’s okay, really. I understand.”

And I do understand all too well via my mother’s bizarre and eventful journey through dementia penned in I Will Never Forget.

Shortly after, he was finished. As we passed each other, her quietly being lead by his firm grasp, I repeated my remark with genuine intensity. “It’s really okay” I affirmed as I handed him a business card with my book information on it.

“Never judge a book by its cover.”

We’ve all heard this overused phrase, but regardless it’s so very true.

Honestly I was a little surprised by the woman’s clear break from reality and verbal overture. I am very familiar with the subtle soft signs of dementias, especially Alzheimer’s: fidgeting, hair twirling, pacing, wandering, verbal outbursts, random seemingly meaningless talking, a disheveled appearance and more.

This woman stood there for possibly 10 minutes and never exhibited one telltale sign of illness – and Alzheimer’s disease is a real, neurological illness.

Although a little pale, her hair was neat; gait and posture appropriate; there were no revealing mannerisms that alerted me, and her voice was clear with the proper inflection. As an Occupational Therapist, I’ve worked with special needs children and adults for decades and have honed observation skills when it comes to people who might have a disability. Granted I only watched her on and off for perhaps 10 minutes.

And therein is my point: You never know what someone’s going through just by looking at them.

Married for more than 25 years, my brother Jerry’s wife Wendie died suddenly from inoperable glioblastoma – brain cancer. Jerry’s world imploded with the passing of his beloved wife and despite his professions to the contrary, I’m convinced he never really recovered.

As the months passed, even under crushing emotional loss, my brother always projected an upbeat demeanor, camouflaging his inner hell. He never retreated into a cave of self-pity or wallow in depression, not that he wasn’t entitled. In time he even expressed hope that he would find another special lady. I wished that for him too.

But it was not to be.

A few years after Wendie’s death, Jerry was diagnosed with terminal, stage-four esophageal cancer. Stunned. Shocked. Horrified. To have suffered Wendie’s loss and now his own impending demise was unfathomable!

Despite brutal emotional and physical pain, Jerry always maintained a gregarious nature as he chatted with the cashier, bank teller, paper boy and waved at the mail lady.

To his puzzled look I added, “How do you project such a positive attitude with what you’re going through?”

He smiled and shared his wisdom.

A lesson for all of us about life from someone who faced death and lost.

END_OF_DOCUMENT_TOKEN_TO_BE_REPLACED

One thought on “The Many Faces of Hardship”